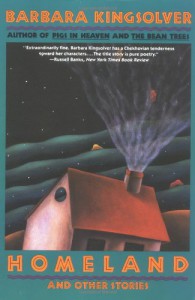 I don't often read short stories, but a colleague lent this to me, and I'm so glad he did. It's beautifully written, and I will definitely go on to try Kingsolver's novels.

This is a collection of a dozen poignant stories: all quite different in plot, style, and setting (though all are in small, non-wealthy communities), but all concerning people who are somewhat marginalised, whether by society or within a relationship. In the few short pages of each story, Kingsolver conjures up whole lives... and then moves on to something different.

HOMELAND
The title story is a warm evocation of an elderly Cherokee woman. Those like her who were forced to leave their homeland "carried the truth of themselves in a sheltered place inside the flesh, exactly the way a fruit that has gone soft carries inside itself the clean, hard stone of its future". She lives with her family and tries to pass on some traditional lore to her grandchildren. This includes a visceral relationship with the environment: vines grow "with the persistence of the displaced", there are "Complicated cracks hanging like spider webs in the corner of the windshield", and in a mining area, "even the earth underneath us sometimes moved to repossess its losses", closing up "as quietly as flesh wounds".

BLUEPRINTS
This is about a couple in their thirties, though they seem older. He is a carpenter and she is a science teacher with an interest in animal behaviour and imprinting - hence the title. In a clever way I can't quite pinpoint, the writing conjures up the detatchment of the couple, with each other and their former home and friends in a larger town. "After so many years together it's as if they've suddenly used up all their words... and are now using the last set over and over."

COVERED BRIDGES
A couple ponder whether to start a family, while visiting the covered bridges typical of the area: possibly crossing from one type of life to another.

QUALITY TIME
"Organisation is the religion of the single parent", and guilt is the price.

STONE DREAMS
The husband loves and studies rocks as a hobbly; the wife "clings to steady things, like a barnacle clings to a boulder", but it is a strained relationship. "We stayed together because he didn't seem to have other plans, and because I couldn't picture myself as being husbandless".

SURVIVAL ZONES
A teenage girl is faced with deciding whether to stay in the small, dull town she has grown up in (and that had been designated for evacuees in the event of nuclear way).

ISLANDS ON THE MOON
This story had the most plot. A 28 year old single mother lives in the same trailer park as her estranged 44 year old mother. The daughter is embarrassed by her mother's weirdness (artistic, eco, hippie): she "just has to ooze out a little bit of art in everything she does, so that no part of her life is exactly normal", such as "painting landscapes on her tea kettles". She also resents her mother's freedom, "When it comes to men, she doesn't even carry any luggage" and ability to attract attention away from her. The daughter equates talking to her mother as being "like quicksand", but when they finally do have a meaningful conversation, the title is perhaps apt.

BEREAVED APARTMENTS
There is a touch of curtain-twitching mystery about this one, which sets it apart from the others. The title refers to houses that have been split into apartments, so that each is missing something - as the inhabitants themselves might be.

EXTINCTIONS
A woman takes her young sons back to her family home in a small town, bringing back all sorts of memories (but leaving gaps as well) and tensions. "X accuses Y of putting on airs since she moved away... but Y has never tried to put the past behind her. Large pars of her childhood just seem to erase themselves quietly while she's not looking."

JUMP-UP DAY
This is set in the Caribbean, where a jumpy is a zombie. The difficult daughter of an English doctor is raised by nuns. She "asked for little and seemed to need so much", so you know there will be trouble.

ROSE-JOHNNY
This is about difference: the burden it can be in a small town, compared with the open-minded acceptance of a child.

WHY I AM A DANGER TO THE PUBLIC
Union politics, prejudice (sex, race and class) and righteous indignation, with a twist near the end.


MISCELLANEOUS QUOTES
* "When the going gets rough you fall back on whatever awful things you grew up with."
* "We are driven to duty and hoard happiness by taking photographs."
* "Palm trees, newly transplanted [to a trailer park], looking frankly mortified by their surroundings."
* "Bob, who associated processed foods with intellectual decline."
* "a new house that is too large and dramatic for a family of three... the drama of the house gets to us, forcing us to rise to occasions we'd all rather just let pass."
* Children are sent to an estranged grandmother every supper to appease her "the way the Aztecs every so often offered up to the grumpy gods a human heart". (I'm not keen on the structure of that sentence, but I like the analogy.)
* Such low expectations: "we were in love by modern standards"!
* Pondering a film that has been censored for TV, a woman "feels that her own life has been like that, with the exciting parts cut out".
* A woman not fully accepting of her pregnancy, "just doesn't think about what's going on there other than having some vague awareness that someone has moved in and is rearranging the furniture of her body".
* On being something of a misfit and comparing the lives of neighbours, "A feels permanently disqualified from either camp, the old-fashioned family or the new. It's as if she somehow got left behind, missed every boat across the river, and now must watch happiness being acted out on the beach of a distant shore". 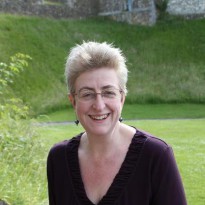